The office and commercial building TRION at Leipziger Platz – developed by the AGIB Real Estate Group – is nearing completion. After a construction period spanning over three years and completed under the most difficult foundation conditions due to the intersecting metro and suburban rail lines, the TRION office and commercial building now appears with a finely structured and elegantly bright façade.

After over 70 years, the historical city “octagon” at Leipziger Platz has finally been completed. Closing off the Northwest corner of the octagon, the office and commercial building is harmoniously integrated into the octagonal shape of the overall site, yet it still remains an independent, identity-forming building.

The TRION at Leipziger Platz consists of 10 storeys and an underground car park. The ground floor is home to stores and restaurants. The upscale office space is located on the floors above. A standard office floor located in the lower part of the building consists of approximately 1,100 sq. metres of leasable space. This space can be divided into three separate lease units starting from an area of 360 sq. metres. The floor located in the beautiful tower section have a total leasable area ranging from 410-820 sq. metres. The building’s entire leasable office space (consisting of floors 1 to 9) is about 8,185 sq. metres. In total, the sections on the ground floor for stores/restaurants have a total area of approx. 830 sq. metres and can also be flexibly sectioned off.

“As the building owner, we are extremely proud and grateful that we have mastered the urban development challenges at this historic location in the heart of Berlin,” explains Oliver Weisigk, the Managing Director of AGIB Real Estate Germany GmbH. “TRION at Leipziger Platz is a very demanding project that is situated in a very significant place in the middle of Berlin. With the construction of the last undeveloped piece of real estate within this building complex, we have now completed a construction project that began directly after the fall of the Berlin Wall. I would like to express my sincere thanks to the international project team at the AGIB Real Estate Group, development manager FREO Germany GmbH, project controller BohnZirlewagen, the architects at léonwohlhage as well as all planners and participating companies who have done such exceptional work here.”

The building’s concept was completed by the renown Berlin architects léonwohlhage, who were awarded the contract after winning the 2016 competition. With low-key spaciousness, the building was integrated into the existing ensemble. In line with its prominent location, the building’s representative character and the conciseness of its appearance are at the forefront.

“From the outset, the fact that TRION was the final building at Leipziger Platz largely influenced our design concept,” says Professor Hilde Léon, architect and managing director of the executing office léonwohlhage architects. “For one thing, we wanted to strengthen the entire building ensemble, which is strongly characterised in terms of design through the uniform façade grids. This would enable us to avoid creating an architectural outlier, which would have pushed this new construction into the forefront. The façade at Leipziger Platz is particularly striking as it radiates a clear elegance through its calm and tranquil character. Meanwhile, the appearance towards Ebertstraße extends homogeneously across the tower into the attic floor of Leipziger Platz,” explains Hilde Léon further.

Both in the selection of the building materials as well as in the construction method and through the use of sustainable building technology, TRION at Leipziger Platz also took ecological and sustainability aspects into consideration. The building received certifications as per LEED platinum, Core, and Shell standard.

“With TRION at Leipziger Platz, the Berlin-based architects léonwohlhage have developed an architectural language which perfectly interprets the genius loci through the new building,” explains Regula Lüscher, Senate Building Director.

“Where for many years a barren plot of land existed, TRION at Leipziger Platz now fills this void with a modern commercial building that not only completes the urban ensemble, but also meets the contemporary requirements demanded of such a building,” says Ephraim Gothe, Building City Councillor for Berlin-Mitte. “Through the TRION building, the overall architectural picture of the capitol city is thereby given an additional impulse.”

The ground-breaking ceremony for TRION at Leipziger Platz was held in November 2017. Upon completion of the eight-month civil engineering phase, which was accompanied by a high degree of technical and logistical challenges due to the difficult underground, the foundation stone was laid in August 2018. However, due to the measures implemented to avoid further spread of the corona pandemic in March 2020, the topping-out ceremony for the building was not held as customary. The building will be completed by Summer 2021. 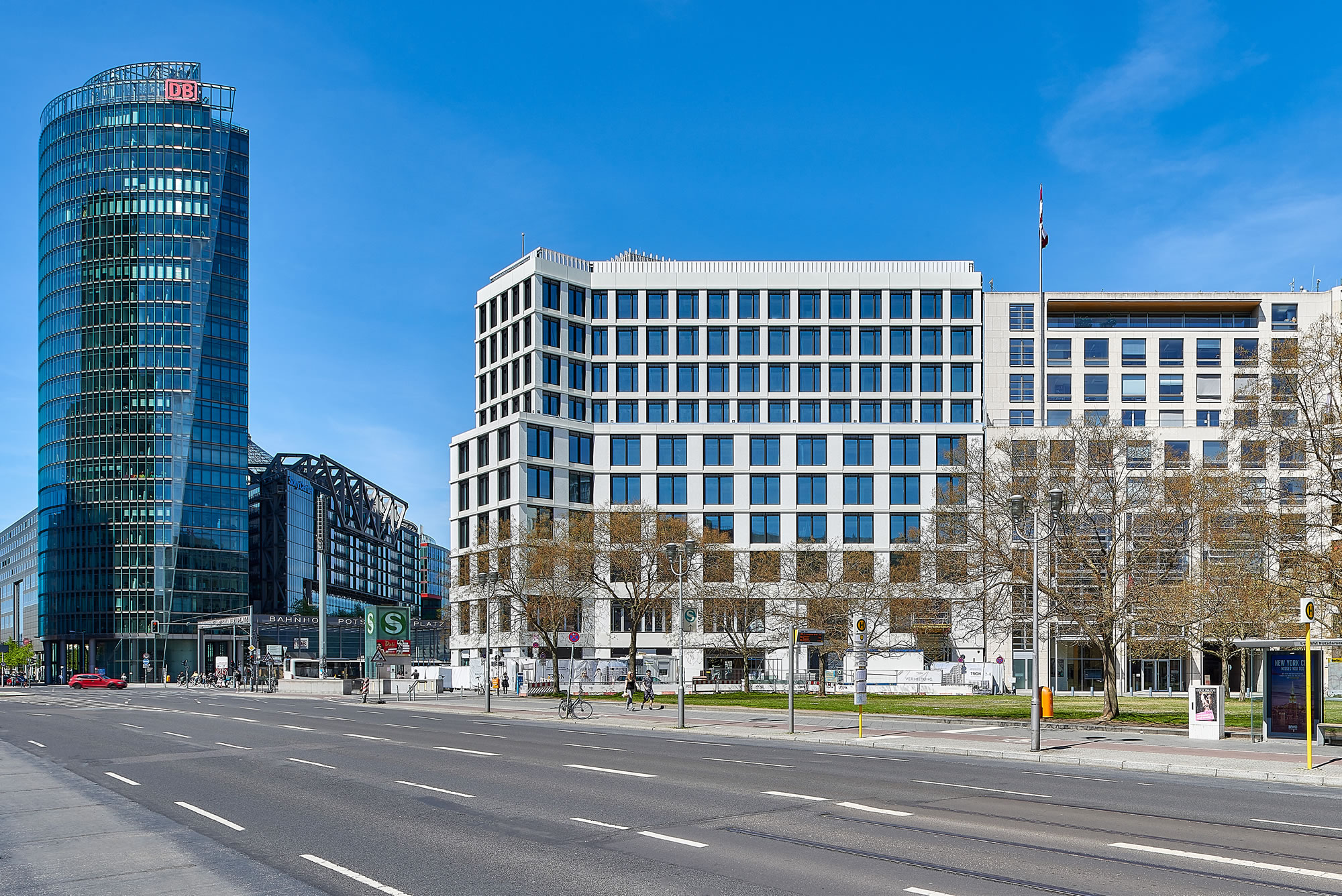 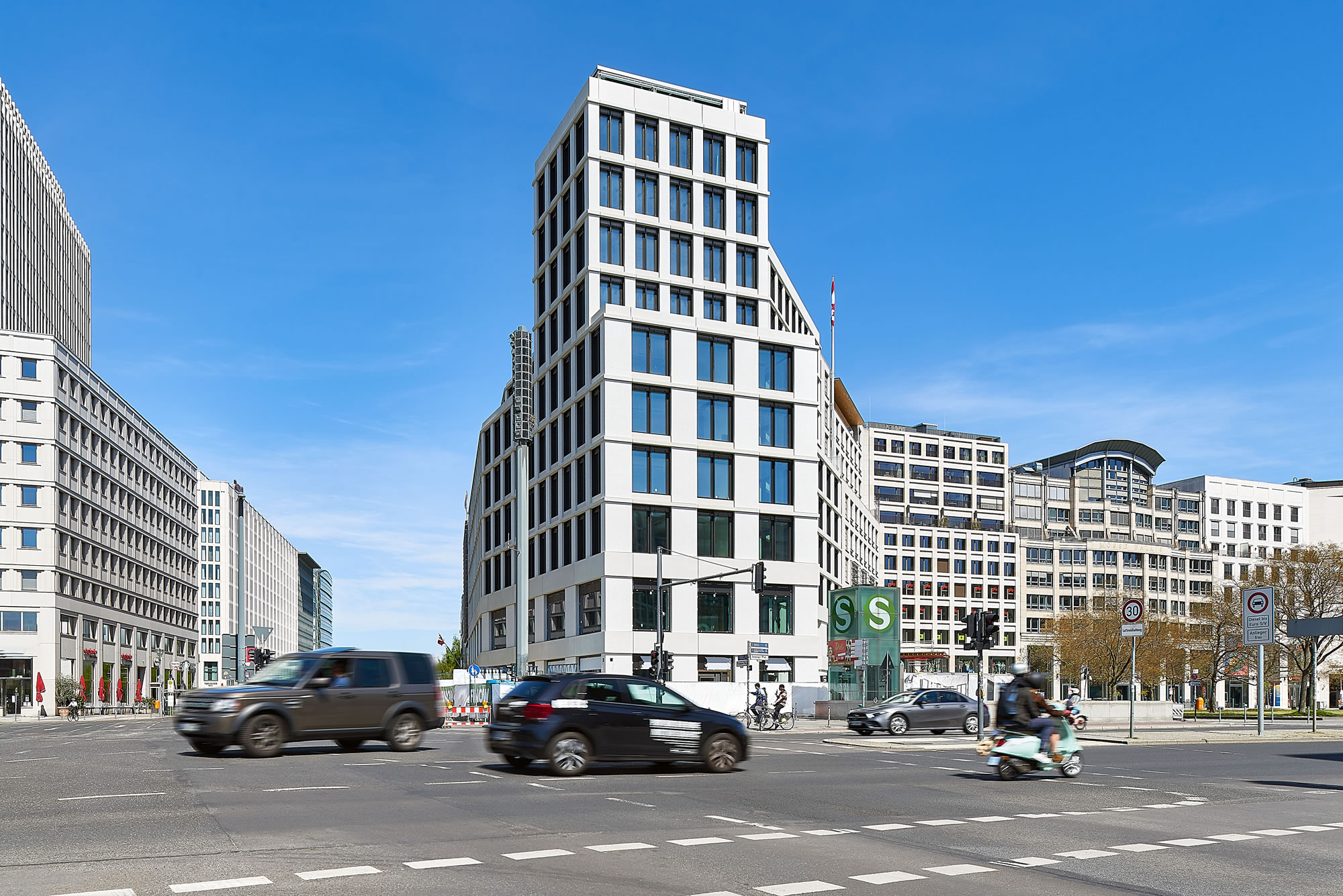